An Abu Dhabi holiday is just 7 hours flying time from the UK and with virtually guaranteed year-round sunshine, a holiday to Abu Dhabi is the perfect destination for a mini break, fun-filled Abu Dhabi family holiday or a stopover as part of a multi centre trip.

Sculpted out of the desert, it is a superb mix of old arabic tradition and modern state-of the-art; from bedouin camps in the sands, gold souks and wooden dhow trips along the creek to mega skyscrapers, huge shopping malls for tax free shopping and fine dining restaurants that many a celebrity chef have put their name to. Sightseeing opportunities are endless and let’s not forget the stunning beaches - perhaps consider splitting your holiday with time spent in the city followed by a relaxing stay soaking up the sun and taking advantage of the many water sports on offer.

Abu Dhabi All-Inclusive Holidays are becoming more and more popular due to the cost of food and drink in Abu Dhabi. The Abu Dhabi Hotels that have all-inclusive options are Intercontinental Abu Dhabi, Yas Hotel Abu Dhabi and the recently opened Rixos Saadiyat Island.

Whatever you choose, there really is something for everyone. For more information about what to do on your Abu Dhabi Holidays, click here. 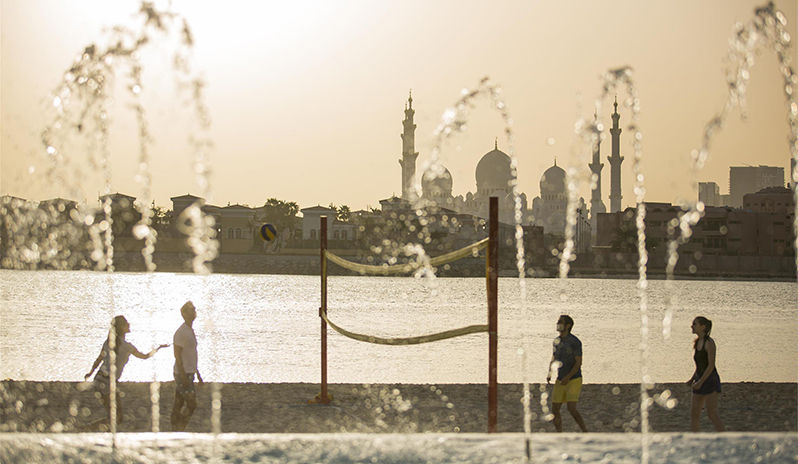 Must Do In Abu Dhabi

So good is the shopping in Abu Dhabi that it’s become something of a national pastime. With luxury shopping malls and local markets offering everything from gold and designer watches to carpets and textiles, the city’s shopping options are as eclectic as it comes. Hit the souks for local souvenirs like spices, perfumes, silks, henna, or dallah (Arabian coffee pots). Or cool off in one of the modern malls carrying everything from high street to ultra high end brands. Ask the cashier for a tax invoice in order to claim back the VAT when departing at the airport.

Of all the city’s landmarks, none is as synonymous with Abu Dhabi as the stunning Sheikh Zayed Grand Mosque, which came third in TripAdvisor’s recent list of the world’s top 25 landmarks, beating the likes of the Taj Mahal in India. Able to accommodate over 40,000 worshippers, it boasts 82 domes, more than 1,000 columns, 24-carat-gold gilded chandeliers and the world’s largest handmade carpet, which weighs 35 tonnes and took 1,200 women two years to make. Complimentary guided tours are offered daily. Dress code applies.

If you are going to do an excursion in Abu Dhabi, a Desert Safari is a must. You will depart your hotel mid afternoon and make your way into the desert where you will experience an unparalleled adventure over the sunkissed golden sand dunes in a 4x4 vehicle followed by a magical evening in a traditional Bedouin camp.

The Abu Dhabi weather is probably the biggest reason for travellers to have a holiday in Abu Dhabi. The hottest month in Abu Dhabi is August with average temperatures of 41°C and the coolest in January at 23°C with the most daily sunshine hours in June. The most rainfall is in the month of February with an average of 40mm of rain. In our opinion the best months to have a Abu Dhabi holiday are in October, due to the heat has subsided but the sea still has the warmth from the summer months. 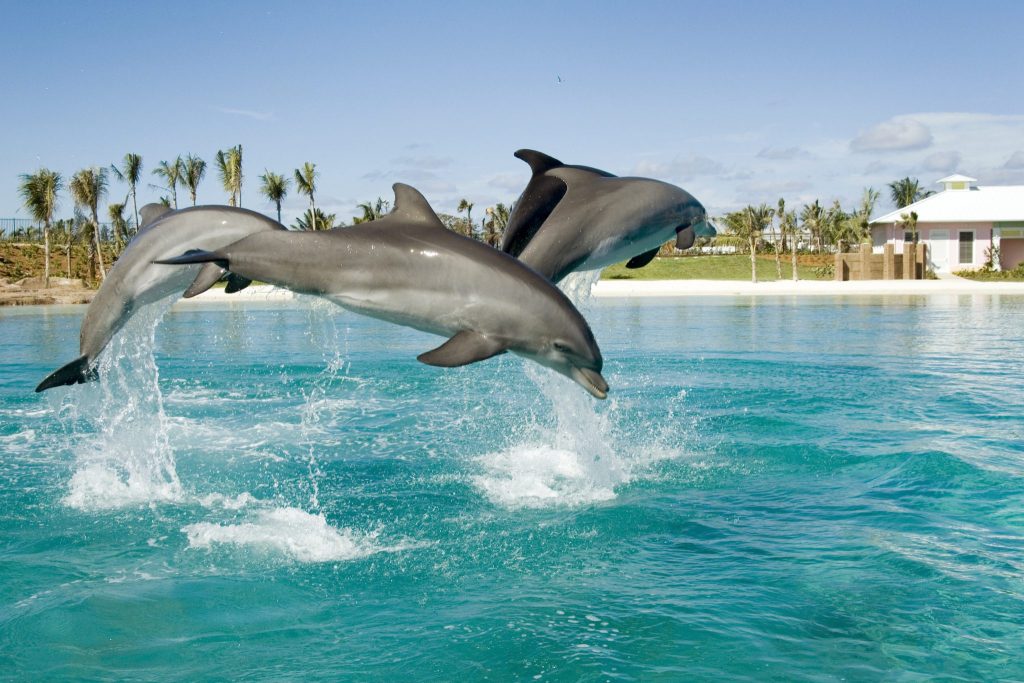 Book your Trips in Advance

The majority of us tend to book our trips and Excursions when we are in resort, however this sometimes can lead to disappointment as some places and attractions get booked up especially in high season or public holidays. Have a look at some of the excursions on offer in our THINGS TO DO section.

Abu Dhabi is full of every type of cuisine on the planet and so means that they all are competing for your business. On every night of the week there is a promotion like the infamous "Abu Dhabi Brunch" on a Friday. A favourite for many people are the all you can eat buffets which tend to be of a very high 5 star standard with an array of cuisines. Check out Time Out or Zomato before you travel for the latest offers across Abu Dhabi. 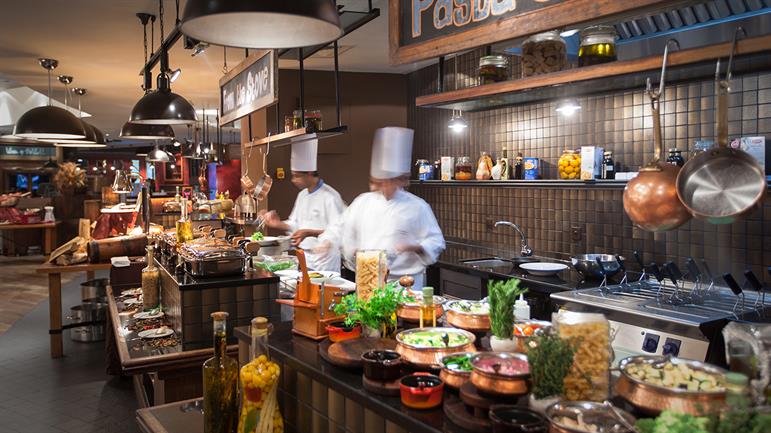 Having medication with you can be a problem in a few counties and in Abu Dhabi you need to be aware that certain medication such as codeine based medicines and some opiates that are OK in the UK, are banned in the UAE. Check online for up to date list of restricted medication in the UAE and carry an official letter from your Doctor.

Getting around is easy

Getting around in Abu Dhabi is very easy but not somewhere you would want to walk for too long, especially in the highs of Summer. All hotels and restaurants will call you a taxi and they are metered and generally good value.  If wanted to go to and from Yas Island, then try the Yas Express – the complimentary shuttle bus service in Yas Island– runs daily in two routes providing easy access to Yas Island’s main attractions and landmarks. 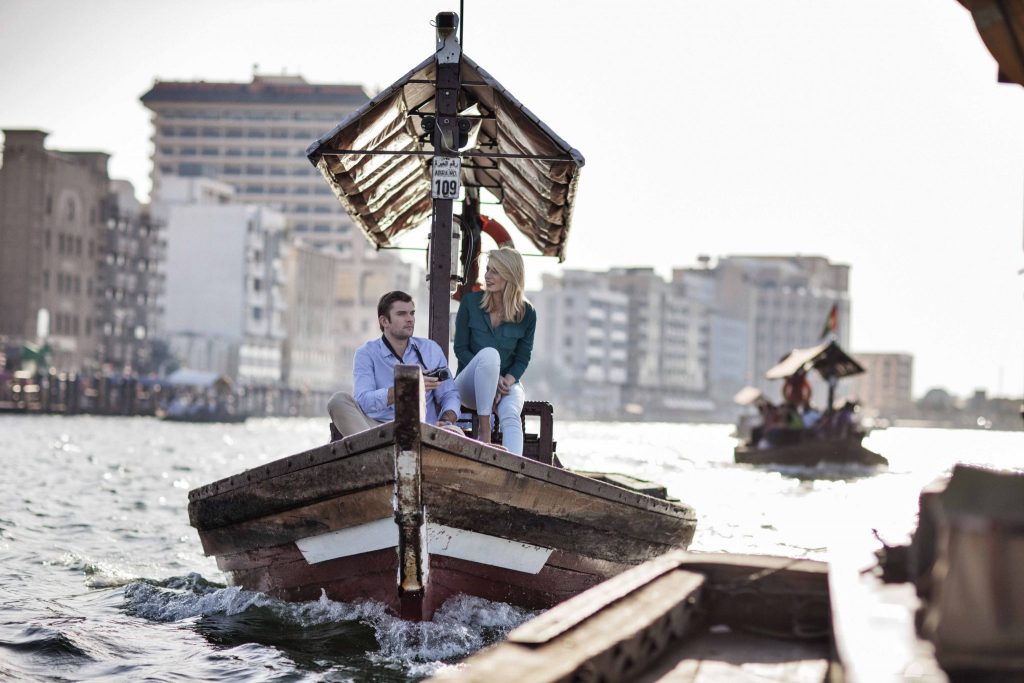 Beach Rotana Abu Dhabi is located right in the city and boasts a great central location and directly connected to shops, cinemas of Abu Dhabi Mall.

Emirates Palace is undoubtedly one of the most luxurious hotels in Abu Dhabi located on a 1.3 km pristine beach with landscaped pools and a private marina overlooking a natural bay.

The Intercontinental Abu Dhabi is located in one of the best positions in Abu Dhabi with a beachfront location and just a short drive from downtown Abu Dhabi.

The Ritz Carlton Abu Dhabi Grand Canal is situated minutes from the city within a 57-acres of lush landscaped gardens overlooking the Grand Canal from the Al Maqta area of Abu Dhabi island. Relax in the Venetian inspired village in front of the Grand Canal, or take a dip in the 1,600-sq-m outdoor pool at this luxury resort.

Discover the luxurious world of Emirates Palace with a tour of our grand spaces, led by a knowledgeable Emirate guide.

The Abu Dhabi Falcon Hospital is the world’s foremost falcon welfare institution, and the first of its kind. It opened

Ferrari World Abu Dhabi is the world’s first Ferrari theme park. The park is a tribute to the passion, excellence,

Ferrari World Abu Dhabi is the world’s first Ferrari theme park. The park is a tribute to the passion, excellence,

Discover the magic of the Great Capital Abu Dhabi by night. Embark in this journey that will first take To

The Louvre Abu Dhabi is an art and civilization museum, located in Abu Dhabi, UAE. The museum was inaugurated on

Qasr Al Watan is an incredible, new and unique landmark in the United Arab Emirates. A Palace brimming with knowledge,

A sightseeing aerial excursion that begins from the idyllic seafront and flies over the landmarks of Dubai or Abu Dhabi,

Please call one of our Abu Dhabi specialists or send an enquiry.


I would like to receive the latest JA Resorts Holiday offers and exclusive deals.

Why Book with us?